What is cuter than a bunny? A crochet bunny treat bag! This drawstring bag can be made with just one skein of Lily Suran ‘n Cream cotton yarn. 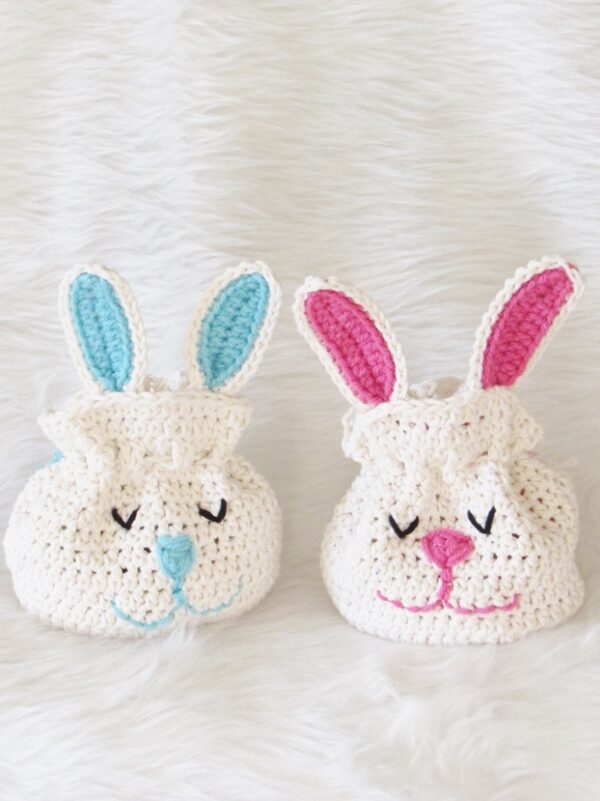 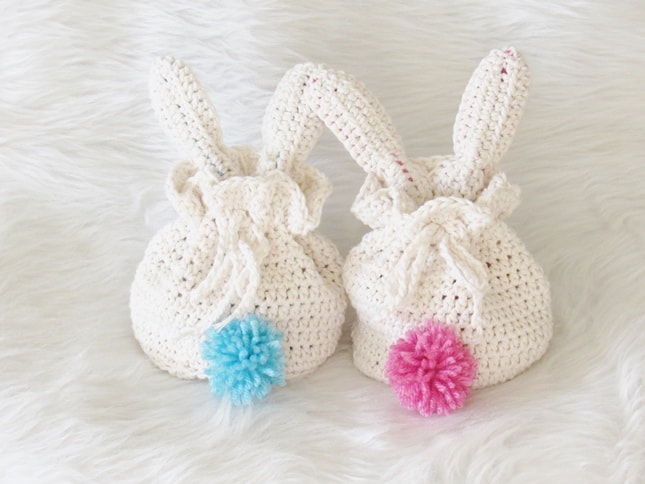 I love cute little projects that whip up fast and don’t take a lot of time. Since people are mostly outdoors during spring and summer, small projects are great for satisfying their crojo. 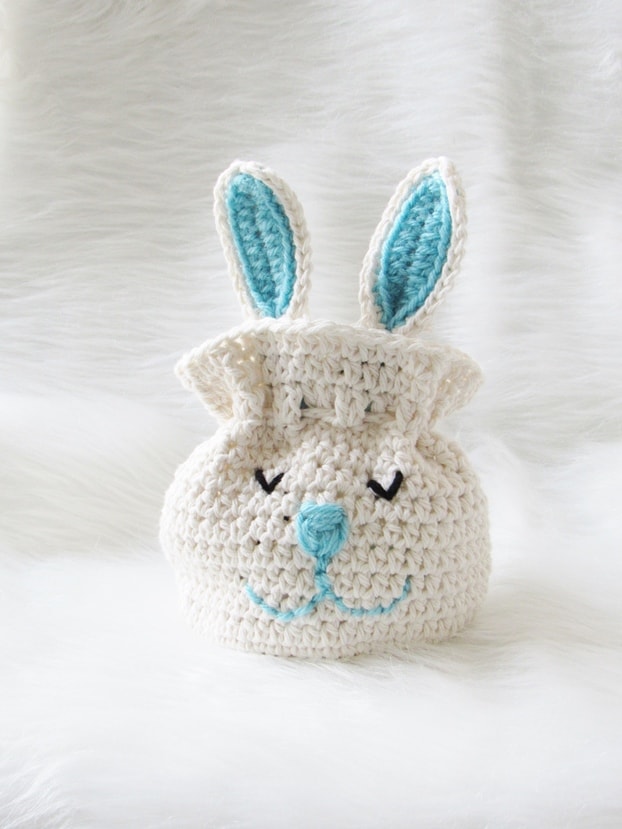 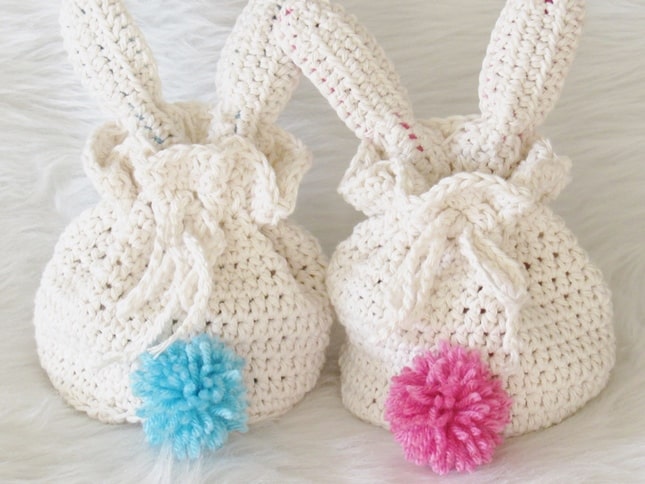 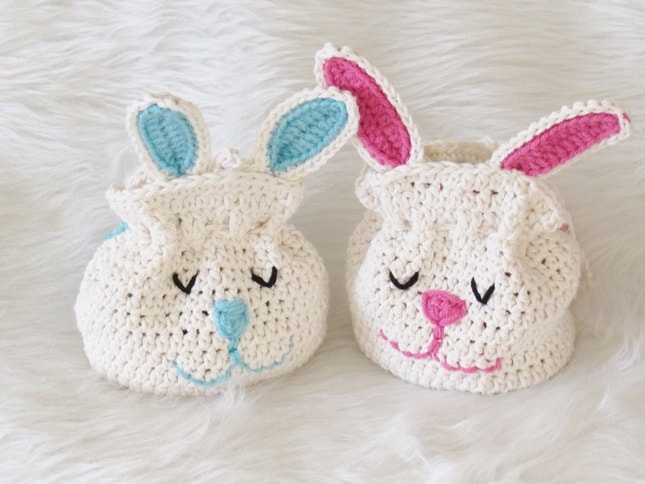 I always get nervous while trying to make faces. I am not good with hand embroidery, and It took me several tries to make the bunny face look decent, lol! The first few ones I made looked really cruel, ahem, ahem!

My husband and daughter insist that my final attempt came out cute but I still like them more from the backside. So if you are like me, you can avoid doing the facial features and just keep the ears and it will still look cute.

You can work from the free pattern below or purchase an ad-free PDF for $2.99 here. You will receive a download link once you make payment and click “Return to Merchant”.

You can pin it for later here.

The base is 4-1/2 inches in diameter and the sides are around 5 inches tall.

One bag takes around 100 yards.

Circular Base of the Bag

With smaller hook, ch 4, sl st to the first ch to form a chain ring. 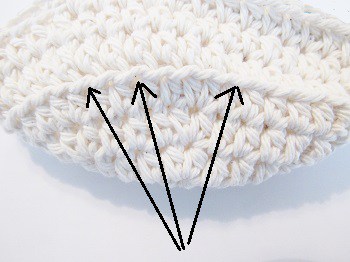 2. Free loops are left around the base from working in the back loops only 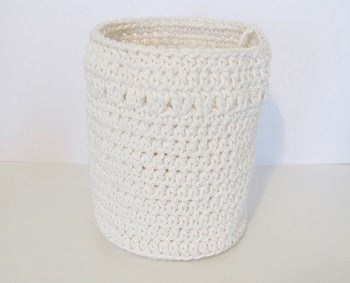 3. Completed bag before adding the drawstring cord looks like a tall cup

Note: The first row is worked in the back loops only as shown in pic 1 above.

Round 2: Work 1 hdc directly in the next marked st, move the marker up into this st, 1 hdc in each st across until you end in the st right before the marked one.——–48 hdc

Repeat Round 2 until you complete a total of 10 rows including the first sc row, 1 sc in next, sl st to next st to level the row. Do not turn.

Note: You will be inserting your string through the gaps in the above row.

Repeat the above round once more, fasten off and weave in the tails. 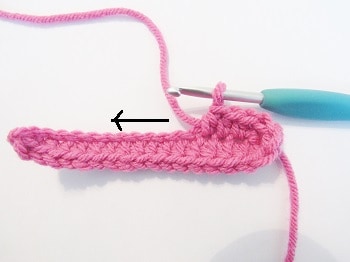 4. Pivot and work into free loops of the foundation chain 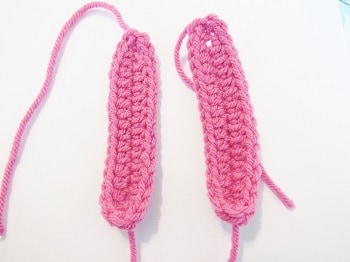 5. A pair of inner ears completed

Using cream color yarn, leave a 20-inch tail for sewing, Ch 18, and repeat the same steps as above to make the outer ear. Do not fasten off.

Joining the Outer and Inner Ears 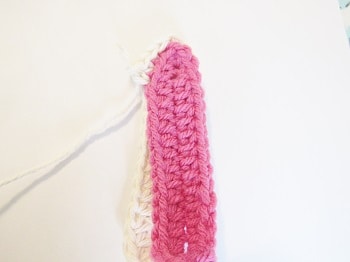 6. Join the inner and outer ears with a round of sc

Note: You will be able to hide the tails between the 2 layers.

Overlap both the inner and outer ears with the wrong sides touching each other. I actually missed this when I made my bags, so the ears don’t look very neat from the back. Continue with the cream color yarn and work a round of sc in the back loops only to join both the layers together, sl st to the first sc and fasten off. 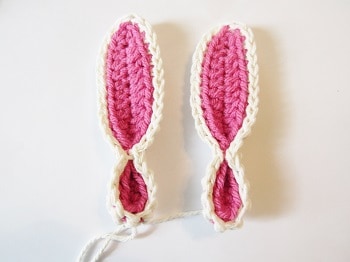 7. Pinch and sew the ears at the base

Pinch the ears about 2 inches above the base and sew it.

Make one more ear following the same pattern. Keep them aside for later.

Note: The nose should align with one of the dc clusters.

Making the Nose and Mouth 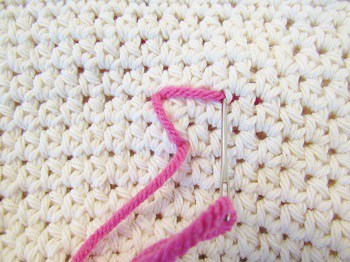 8. Making a triangle outline for the nose 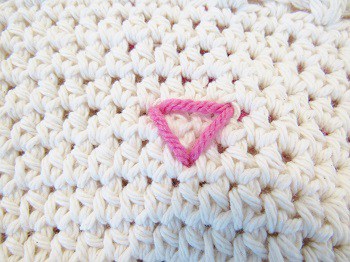 The top of the nose is on the  7th row from the base. First, sew the outline of a triangle and then fill it with yarn. The mouth is made using a back stitch. Watch the video at the end of the blog post to see how to sew a back stitch.

Make a simple V shape for closed bunny ears on the 8th row from the base. I made mine 1-3/8 inches apart.

Making and Adding the Drawstring Cord

With bigger hook, ch for a length of 23 inches and fasten off. Insert it in and out through the gaps between the dc round. The tails should be right at the back of the nose of the bunny to ensure that the face stays symmetrical when you pull the string. 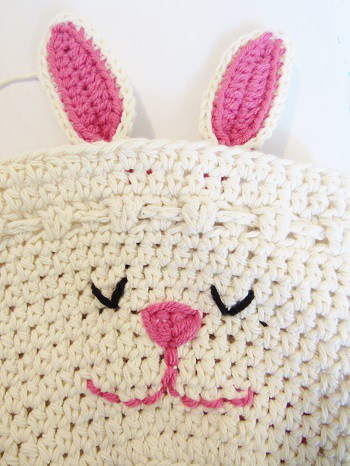 Place the bunny ears close to each other but slightly slanting.

Insert the ears in such a way that the pinched part won’t show and the base hits a little below the dc row. If you don’t insert it deep enough your ears will flop when you close the bag.

Whip stitch along the sides and the base of the inserted portion in a “U” leaving the top unstitched. Take care not to sew through the string while working along the dc round.

I used a 2- 1/2 inches Clover pom pom maker for the bunny tails. I wound only one layer of yarn to keep the pom  poms small. You can find Youtube videos on how to use the pom pom maker.

Weave in any tails left. 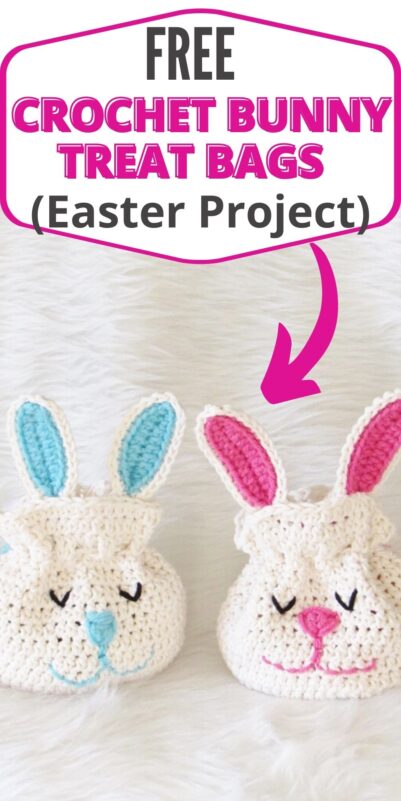 These are so cute! I plan on making them for my 2 youngest granddaughters next Easter. I may make them for some great nieces and nephews as well. I already have a plan for this year. Thanks for sharing the pattern. I so much enjoy making crafts to bring enjoyment to others - very thankful for that gift I have.

Thank you for the share. This is adorable. My grand kids and great grand are getting these as a new Easter basket. Thanks again.

I just made five bunny bags for my great grandchildren. All in different colors. They’re all off white with pink, blue, green, brown and dark blue ears and tails. So cute and fun to make! Now I give to their grandmother to fill them.

Hi Christine, that sounds wonderful. I wish I could see them.

How can i save the pattern

You can bookmark this page or purchase the PDFfor $2.50.